In 1996 when two PHD students from Stanford University in California started a research project nicknamed “backrub” to search for things more effectively on the Internet, little did they know the impact they were going to have on humanity and how information is indexed.

In those days search engines ranked their results by counting the number of times search terms appeared on a page. Larry and Sergey’s search engine analysed the relationships between websites. This resulted in a much better algorithm and technology that delivered more relevant search results of pages and content on the Internet.

So much has changed since the day Google was born. I remember those early days of the Internet so clearly. In those days there many search engine choices. Remember the likes of Altavista, Ask Jeeves, Excite, Lycos and even Hotspot?

When the two Stanford students officially founded the company Google in 1998 I don’t think they imagined in their wildest dreams the massive impact their search engine would have in the world we are living today.

The name “Google” came from misspelling the word “googol” which is the term for the number one followed by one hundred zeros. 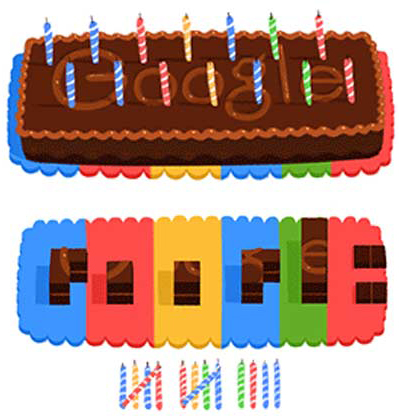 The search engine giant turned 14 this week and to celebrate, the famous Google Doodle which celebrates holidays, anniversaries, and the lives of famous artists, pioneers, and scientists was changed to a birthday cake on Thursday 27 September.

The exact date of Google’s birthday has often been debated over the years. Google the company filed for registration on September 4, 1998 and was officially established on the 7th of September 7. The Google.com domain was only registered on September 15. But Google decided to celebrate on the 27thof September every year. Many say it goes back to where the 27 coincided with the record number of pages they were indexing at the time.

Search was the start that led Google to acquire many products over the years. Apart from YouTube and Gmail, they also own many mapping products, analytical tools and even hardware with their recent acquisition of Motorola Mobility. They literally have dozens of interests in technology.

They have without any doubt been an incredible success story which does come with some concerns. Many say it is dangerous to have one company with so much power that knows so much about us.

Google’s shares have been flying upwards, outpacing giants like Microsoft and Apple in 2012. Their share price surpassed the $700 mark and some financial experts are now focussing on $1000 in the next few months.

Whichever way you look at it Google has an incredible future ahead. When one looks at the staggering growth in mobile with their Android platform and the future of products like self driving cars, Google is shaping the future of the planet in many positive ways.