It is no secret that Blackberry has been struggling to stay relevant in global markets over the last three years.

While they maintain their dominance in some markets like South Africa, Nigeria, Indonesia and some Latin American countries, elsewhere, the pioneer of the smartphone has been losing market share at a rapid pace.

The reality is that Blackberry failed to innovate quickly enough against the rapid rise of the iPhone and a plethora of great Android devices.

Since taking over as Blackberry CEO in January 2012, Thorsten Heins has impressed me with his leadership.

He took over a ship that was torpedoed and was taking in water fast. He stabilised the company financially with big retrenchments, and focused the entire organisation into finishing the Blackberry 10 operating system, as well as bringing to market the first of their devices, the Z10.

The financial markets certainly have had their doubts, and leading up to the global launch of the Z10, the Blackberry share price actually moved up from a low of around $6 to $13 after being punished for many months by investors. They are debt free and have around $2 billion in the bank.

Will the latest flagship device from Blackberry revive the troubled Canadian smartphone company? 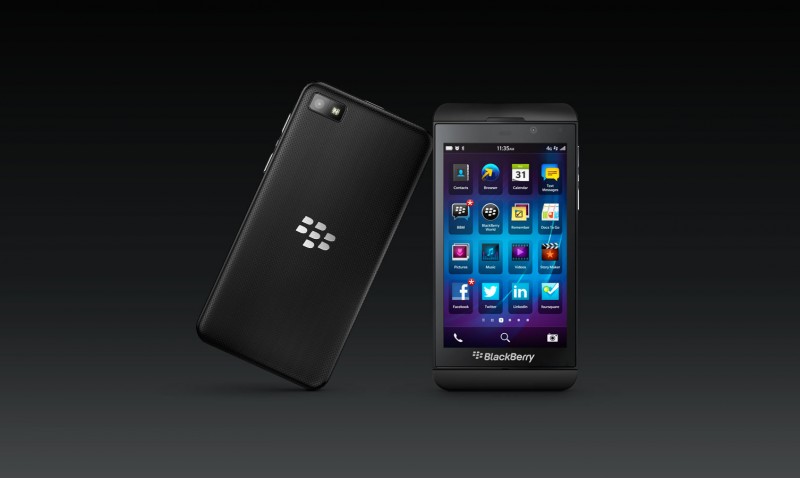 The Z10 smartphone is a very good device. It is without doubt impressive and better than what I expected. The design is beautiful and probably one of the nicest looking smartphones in the market. Without a doubt the best device Blackberry has made in its history.

Blackberry has always produced high end classy devices and this one does not disappoint. When you hold the Z10 in your hand it feels slick and well built. It weighs just 135g and feels well balanced. The rubberised texture on the back of the phone stops the phone from moving around and slipping off your hand.

It is 130 mm high, 65 mm wide, 9 mm thick and in fact many who saw the Z10 at my desk confused it for an iPhone 5. They look very similar from a distance, but the Blackberry device is has a slightly larger screen.

The 4.2 inch touch screen has a resolution of 1280 x 768 with a 24-bit colour depth and performed nicely in direct sunlight.

It is an all touchscreen device except for the on/off button at the top and the volume controls on the side of the phone.

It has a 1.5 GHz dual core processor; it has 16GB of storage memory and 2GB of RAM. You can insert a removable microSD if you need more storage space. It has a micro USB port for charging and data synchronisation and a micro HDMI port if you want to connect to a TV or projector.

The device runs smoothly between applications and unlike previous Blackberry devices and the number one complaint most users have, I did not have to remove my battery once. My device has not frozen since I started using it. 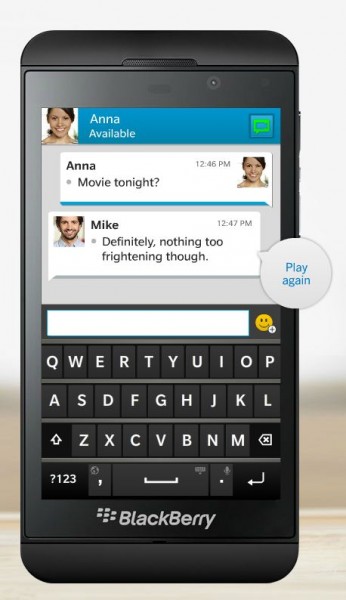 The device has an 8 megapixel auto focus camera in the front and can also shoot video at 1080p. The front camera is a 2 mega pixel camera and can shoot video at 720p, more than adequate for video conferencing.

The battery is ok. I found it ran out in the late afternoon after a day of heavy usage, but I suppose that is factor we all have to live with when it comes to smartphone batteries. The good thing about the Z10 is that the 1800mAH battery is removable so carrying a backup is an option.

In terms of hardware the Z10 has all the bells and whistles that modern high end devices have.

The Blackberry 10 operating system is the challenge in the beginning, as there is a learning curve to it. Once you get the hang of it, you will realise that it has some clever things built into it.

BBM now has a video share capability so you can do video conferencing, and the new Screen Share feature allows you to share your browser view, your photographs or even share a document with another BBM user.The first thing to note is that is does not use data like previous Blackberry devices. The R59 BIS option of eat as much data as you like, is history. You are now billed for the data you use just like with other smartphones. Don’t sound alarmed though, that old BIS model was relevant five years ago with the high data costs. Today with R70 you can shop around and find 500MB of data which is more than adequate for medium to heavy users.

The browsing experience is refreshingly fast on the Z10. The one big complaint that I had with previous Blackberry devices was how slow the browser was! With the new Blackberry 10 operating system this is something of the past.

The Blackberry Balance feature is also quite cool. You can set up your device for work and personal mode. So with one gesture you can separate your work documents, apps and email from your personal ones.

Blackberry Hub is the centre for all your notifications. The new functionality allows you to peek at your messages from within any application. Simply slide you finger from left to right and you get a peek if you have any new BBM’s, emails, Twitter messages etc. Blackberry still is the Rolls Royce of email management.

The one thing that is missing is a physical QWERTY keyboard. This has been replaced by an onscreen keyboard that is responsive and smooth. The text prediction and spelling appears above the letters as you type and you’re able to flick with your finger onto the message the completed word the device predicts. Quite a nifty and innovative way of typing I thought. 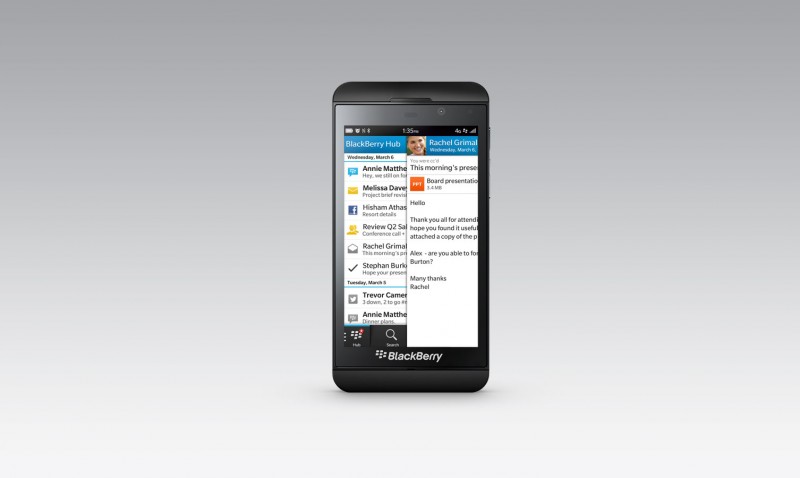 The Achilles Heel of this device is Blackberry World. This is the place where users will go to download the latest apps for the Z10. At the launch Blackberry announced that the store would have 70 000 apps. Most of my favourite apps are not there. Skype, Whatsapp (although we hear that it is coming soon), Instagram and Flipboard to name a few are not in the store.

Blackberry has allowed developers to be able to port some of their apps from Android and be used on Blackberry 10. This requires the user (you and I) to set up software and configure a computer as well as your smartphone so that you are able to download the Android version of the app, port it, so that is will work on the Z10. Most people struggle getting around the basics of a device, now they have to find out how to port apps which quite frankly is easy for a tech savvy user, but for most people it is a mission!

The truth is the Z10 is a great device and Blackberry has produced a device to fight with the big guns like Android and iOS. Is it better than an iPhone or a Samsung Galaxy S3?

In some cases yes, but overall no. If you had a Blackberry before and purchased a Z10 you probably will be very happy but there are some gaping holes, especially with apps.

The problem Blackberry has is that the competition is about to roll out new devices. The Samsung Galaxy S4 is coming in April and in a few months a new iPhone will be launched. Both with established ecosystems and each have a selection of more than 700 000 apps to choose from. Plus there are new choices coming from the likes of HTC and Nokia on the Windows 8 platform.

The device is available on contract from Vodacom, MTN, Cell C and 8ta. Prices vary so shop around for the best deal. Cash price is around R7500.

Blackberry has a tough road ahead, but if they persevere, and improve on their app store and some of the Blackberry 10 functionality, then they may succeed in staying relevant in the future. Right now they have a fighting chance with the Z10, but the competition unfortunately takes no prisoners.