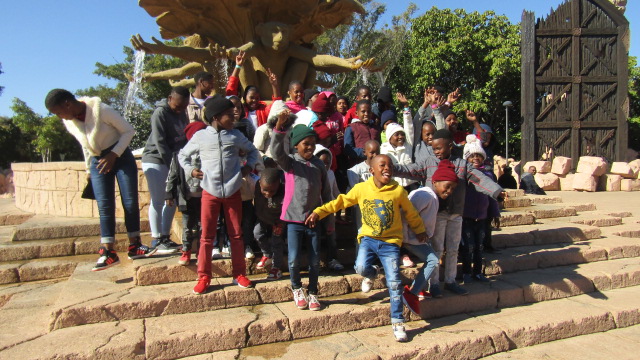 The Nashua Children’s Charity Foundation (NCCF) invited a group of 40 children from Orlando Children’s Home to enjoy a special outing to Sun City on the 23rd of July.

The day started very early. The children were collected from Soweto and settled on the bus, enjoying a breakfast of fresh muffins and juices donated by Mugg & Bean. The children also received goody bags for the road, generously sponsored by Nashua North East.

On arrival at Sun City, Mankwe Gametrackers welcomed the group then escorted them into the Pilanesberg Game Reserve. There was much excitement as most of the children had never been on a game drive before. Their first sighting included a parade of about 100 elephants, two lions, hippos, jackal, gnus, zebras, impalas, rhinos, giraffes and springboks. The NCCF extends a huge thanks to the rangers Ewert and Jono for making it an incredible educational experience.

After the game drive, the kids enjoyed a delicious lunch at The Food Factory. After lunch they headed to The Magic Company, where the manager, Wayne, and his team handed out tokens and the games began. The shrieks and laughter grew louder and louder as the excited group rushed around the venue collecting tickets, finding their favourite games and winning prizes.

The cherry on top was when the Valley of Waves team handed out ice creams to all the children, before they boarded the bus home. “The elephants were the best, no, the video games were, no, I loved all the food, no, everything was best”– words that echoed around the bus on the way back to Soweto.

Thank you to all sponsors who made the day possible and for helping the NCCF make a difference in these children’s lives.