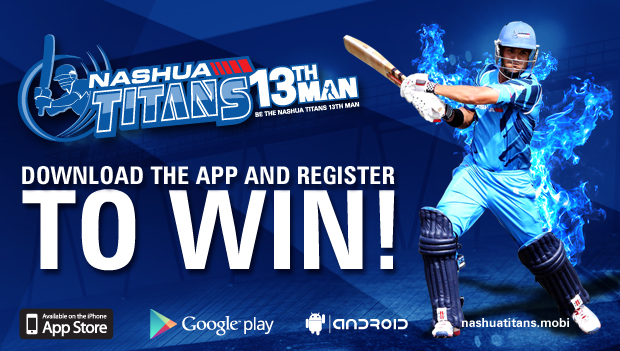 There are just two home games left for two lucky winners to share the bench with their heroes and be a part of the magic as the Nashua Titans 13th Man.

“It was a huge honour to meet guys whose careers I’ve been following for so long,” said the first winner Hendriette Laesecke. “I was on the pitch when they did the coin toss, sat in the dugout with some of the players and was nearly hit by a six,” she said laughing.

Being the 13th Man means connecting with the greats who double as Protea superstars like Albie Morkel, Farhaan Behardien, Martin van Jaarsveld, Jacques Rudolph, and Heino Kuhn. “Never in my wildest dreams did I think I would spend a night being part of the Nashua Titans cricket team, meeting some of my heroes and I’m sure future heroes,” added Hendriette. “I don’t think anyone will realise how much this meant to me.

“After the Nashua Titans won the game, all the players came over to shake my hand and asked if I enjoyed the game and the experience. I felt like a queen the whole time.” If the team continue on their winning streak and reach the playoffs, an overall winner will be selected from the five original winners to accompany the squad with an all-expenses paid trip to the play-off and final – a prize that money just can’t buy!

There are two more opportunities to be in the dugout pitchside with the boys in blue and be treated like a king or queen. Download the Nashua Titans App from your Apple or Android App Stores, or go to NashuaTitans.mobi, click on the 13th Man icon and register to win. This could be your chance!