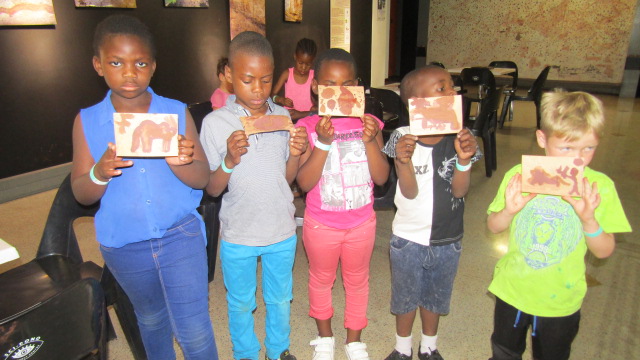 Over 100 children from four different charities experienced a world of wonder and natural beauty when the Nashua Children’s Charity Foundation (NCCF) arranged to take them to the Montecasino Bird Gardens to commemorate World AIDS Day.

The children from Bambi Care Crèche, Ubuhle Bezwe Child Centre, Delfire Orphanage and Thusong Orphanage were welcomed by the Mugg & Bean team who handed out juices and muffins to the children on arrival.

From there, the children made their way to the amphitheatre in anticipation of the famous Flight Of Fantasy Show. The colourful and talented show birds took to the skies, captivating the children gathered there with their breath-taking displays of unrestrained flight and comical routines that had the children shrieking with laughter.

The younger children got the opportunity to pose for pics with a spotted eagle owl and the Montecasino Bird Gardens mascot while the older, braver children in the group posed with a 2-metre albino python.

The children were then given a chance to wander freely around the gardens where they could see the 40-odd different bird species on display as well as the lemurs, sloths and chameleons, to name a few of the Gardens’ more eclectic residents.

The day ended with a delicious meal supplied by the Flamingo Restaurant that the children wolfed down before being given gift bags filled with toys and sweets from The Magic Company.

“It was a day I don’t think the children who attended will forget in a long time,” said Helen Fraser, director of the NCCF.

“Not one of the children who attended had ever been to the Montecasino Bird Gardens before and the sense of excitement in the air from when they arrived until after they left made all the hard work that went into planning the day well worth it!”

Following the success of this year’s Montecasino Bird Gardens visit, the NCCF are already putting plans in place for another outing next year to commemorate World AIDS Day by bringing joy to the lives of the children under their care.