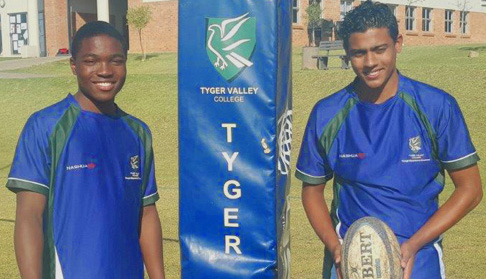 When a once in a lifetime opportunity for two young rugby players seemed unattainable, the efforts of a determined teacher changed things for the better. Andrew Barnes, Head of Sport at Tyger Valley College, approached Nashua Limited to sponsor two first team rugby players, Phenye Mokgobjoa and Alexei Isaacs, to attend the school’s overseas sports tour in April 2016.

The tour took place in Singapore and Malaysia, and saw several of the school’s best teams competing against local schools in both countries. With the help of Nashua’s sponsorship, the two players joined their fellow teammates for the exciting trip – and scored tries for the team during the tour.

A moment of glory
“It was an incredible feeling to score a try on international ground,” says Mokgobjoa. “I suffered a cramp at the last moment – but managed to reach the try line.”

Highlights and lessons learnt
The cultural experiences of the tour were a highlight for both Isaacs and Mokgobjoa, as they recalled the kindness of the local people they encountered.

Having won three of four international matches, both players learnt never to underestimate the opponent. With closer bonds formed as a result of the trip, Mokgobjoa and Isaacs look forward to a successful season back home.